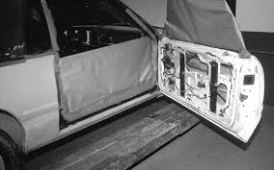 With the pile of Rust gone through and cleaned up it was time to take a real look at what was left if anything to salvage to begin the process of bringing it (the relationship) back to life.

There was absolutely no Trust left.

Not much left in the area of Care.

A gaping hole was where Concern was supposed to be.

And the section where Help was, had completely disintegrated.

But the Drivers Door was somehow still intact.

My first thought was to see if would still open, and if it did maybe I could climb in and access what was inside.  But as I contemplated doing so I realized I had sat in that seat many times and hadn’t done a very good job at “driving” the relationship.  I walked around to the passenger side and the door was banged up… but it was open.   Maybe, just maybe I would try this for now.

Letting my God take the driver’s seat of the relationship between my son and I was the best decision I could make.  It totally freed me up.  I no longer had to worry about the direction it would take, should take, will take.  I knew with Him in the drivers seat, that it would take the shape it needed to.

With one less thing to have to worry about I could get back to my restoration work.

That’s right, that pile of rust had belonged to me.  Not my addict.  It wasn’t my job to cut the rust away on him.  It was for me to cut mine away…

Now to start gathering the new materials I would need to fill in those holes!